The FDA’s proposed list of bulk ingredients that may be used in compounding medications for office use with animals (“positive list”) is positively certain to fail veterinarians, pet owners, and animals.

It protects drug manufacturers, not animal patients. Shockingly, in its new draft Guidance for Industry #256, which includes a proposal for how to nominate additional bulk drug substances to this list, FDA creates hurdles that are exactly the opposite of those FDA specifies when compounding for human health. These FDA hurdles disqualify for nomination nearly every common ingredient prescribed by veterinarians, forcing veterinarians and pharmacies to either start with FDA-approved drugs, or go through yet-to-be-determined justification and documentation of medical rationale. Clearly, this is FDA overreach into the state-regulated practices of veterinary medicine and pharmacy.

Here is a quick picture of FDA hurdles and common medications that would be knocked out of any possibility for nomination. This graphic shows where in the six-step elimination process 36 of the 38 most frequently compounded APIs would not be eligible for nomination to the positive list:

FDA’s draft Guidance for industry #256, “Compounding Animal Drugs from Bulk Substances, is based on FDA’s unsupported position that the state-regulated practice of compounding pharmacy, specifically prescription compounding, is subject to federal regulation under the Food, Drug, and Cosmetic Act (FDCA). FDA continues to assert this position, despite the fact that, in 2011, a Federal court ruled that the FDCA does not give FDA jurisdiction over compounding pharmacy.

Nonetheless, FDA bases this new attempt to regulate compounding for animal patients on this foundation. Inexplicably, to use bulk ingredients to compound for human health, FDA’s guidance states that the active pharmaceutical ingredient (API) must be contained in an FDA-approved drug or have a United States Pharmacopeia (USP) monograph. But for animal health, this new guidance prohibits compounding from the API of any drug that is contained in an FDA-approved human or animal drug!

In this new guidance, FDA sets conditions that are so onerous as to virtually eliminate compounding drugs for animals using bulk ingredients and requires that most compounded drugs be made from finished pharmaceutical goods such as pills and capsules, a scientifically unsound method, which would increase compounding costs by an average of 300%.

The Impact of the Positive List is All Negative

Perhaps, the worst of these conditions is that any bulk ingredient used must be either included on FDA’s “List of Bulk Drug Substances for Compounding for Use in Nonfood-Producing Animals or Antidotes for Food-Producing Animals,” or include documentation of the veterinarian’s medical rationale and the pharmacy’s rationale as to why the medication cannot be prepared from an FDA-approved finished good. The FDA has no statutory authority to require this so-called “Positive List” or to require state-licensed professionals to justify their decisions to FDA.

In addition to the positive list, FDA also released “Nominated Bulk Drug Substances That May NOT Be Used to Compound Office Stock Drugs or Antidotes for Use in Animals,” (the “Negative List”) which currently includes 11 bulk drug substances commonly used in compounding animal drugs. Even though many of these substances have been used by veterinarians for more than 20 years, FDA disqualifies them, claiming that FDA-approved human or animal products can be used as starting material. In so doing, FDA disregards such issues as the quantity of finished product needed (in the case of Dexamethasone or Enrofloxacin this could be hundreds of tablets); the size of the finished compound (in the case of Budesonide or Gabapentin, a compounded capsule may be 5 times larger than a compounded tablet); and the appropriateness of the finished product for use as a starting material (in the case of Itraconazole, FDA-approved finished product is a cyclodextran coated bead that could not possibly be used to make an eye drop or ointment). Other instances (Chloramphenicol, Idoxuridine) override years of veterinarians’ diagnostic and therapeutic experience by stating that a different drug should be used initially, and only upon failure can the veterinarian prescribe the desired treatment.

Ultimately, the “Negative List” demonstrates that GFI #256 prohibits compounding using any API that also is contained in an FDA-approved human or animal drug. To nominate a drug to the positive list, it must not be a component of any FDA-approved drug, and no other approved drug can be used to treat the indication. Doxycycline, for example, is prohibited because it is an approved human drug. This restriction eliminates virtually every common medication that compounding pharmacies prepare for veterinarians! These include amlodipine, budesonide, buprenorphine, chlorambucil, desmopressin, enrofloxacin, fluconazole, fluoxetine, gabapentin, ketoconazole, lomustine, methimazole, penicillamine, pentosan, phenylbutazone, piroxicam, prazosin, prednisolone, sildenafil, theophylline, trilostane, tylosin, ursodiol, zonisamide, and more.

The APIs on the current positive list are very narrowly defined by FDA in terms of strengths, dosage forms, species, and indications. Therefore, many frequently used compounded medications would no longer be available to veterinarians and the pets in their care. This chart shows medications that are currently offered in the formulary of one large animal-health compounding pharmacy that could no longer be offered if the FDA’s new guidance were to be issued.

This proposed nomination process is extremely onerous, and nearly identical to the one for human health that began in 2015 as part of the implementation of the 2013 Drug Quality and Security Act (DQSA), which does not apply to animal health. The new animal-health guidance does not give any hints as to how a positive list would be developed and approved. But if the progress of developing a similar positive list for human health is to be any guide, there is a 64% failure rate of FDA adding common ingredients to the human health positive list.

Of the 740 substances that were nominated for the human-health positive list, 275 were accepted immediately because the ingredient was a component of an FDA-approved drug, leaving 465 for review. As of September 2018, only 53 substances were reviewed by the FDAs Pharmacy Compounding Advisory Committee (PCAC). There were no PCAC meetings in 2019. Of the substances reviewed—just 11% of those awaiting review—34 (64%) were rejected and 19 (36%) were approved. The first PCAC meeting was in February 2015, so this process in human health is now five years old. The veterinary guidance, GFI #256, does not refer to PCAC, nor does FDA have legislative authority to form an advisory committee for veterinary compounding, so how FDA would evaluate and decide on a positive list for veterinary health is unknown. One major difference here that you may have noted is that in human health, if the bulk ingredient is a component of an FDA-approved drug or has a USP monograph, it was automatically added to the positive list. In animal health, it is the exact opposite and worse: components of approved drugs or where there is any human or animal approved drug to treat the indication are ineligible for nomination.

For “outsourcing facilities,” a type of organization established by the DQSA in which companies “volunteer” to be regulated directly by FDA and produce medications for human health, the record of approving APIs for the positive list is abysmal: none of 1,500 proposed substances have been approved—two have been rejected. Under FDA’s “interim guidance,” outsourcing facilities may compound from a list of 261 substances. But ultimately, these entities will be allowed to compound only from APIs on the Outsourcing Facility-specific positive list.

There’s nothing positive for veterinarians, pet owners, or animal patients in FDA’s proposed “positive list” of active pharmaceutical ingredients that may be used in compounding for animal health. FDA says it will improve access to compounded medications in animal health when in fact the complete opposite is true. FDA’s proposed process for nominating APIs for the positive list is onerous and almost no medications currently compounded for animal use would be allowable because of other restrictions placed on dose, dosage form, indications, and species.

Most currently used APIs are not eligible for nomination to the positive list. In this proposed guidance, for which FDA has no statutory authority, FDA is attempting to replicate the process for FDA approval of manufactured drugs, failing to take into consideration that pharmacies are not manufacturers and are serving different needs than manufactured drugs. Animal patients cannot afford to wait for an FDA approval process to determine if their prescription can be filled for their specific drug, dosage form, species, and indication.

The outcomes for FDA’s positive list will be dramatic reductions in the availability of compounded medications, complete disruption of well-established standards of care, skyrocketing costs, and animal suffering and death. 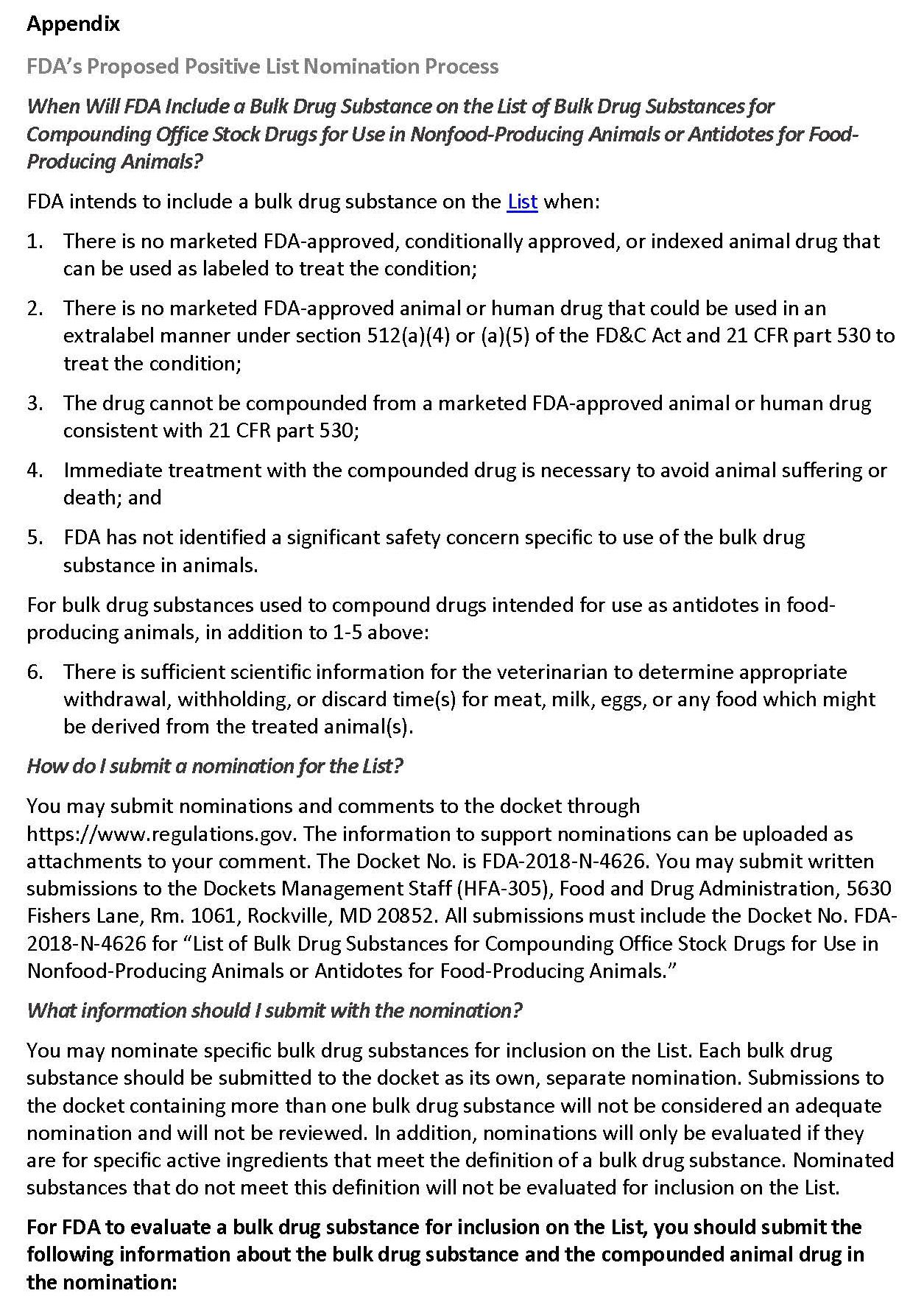 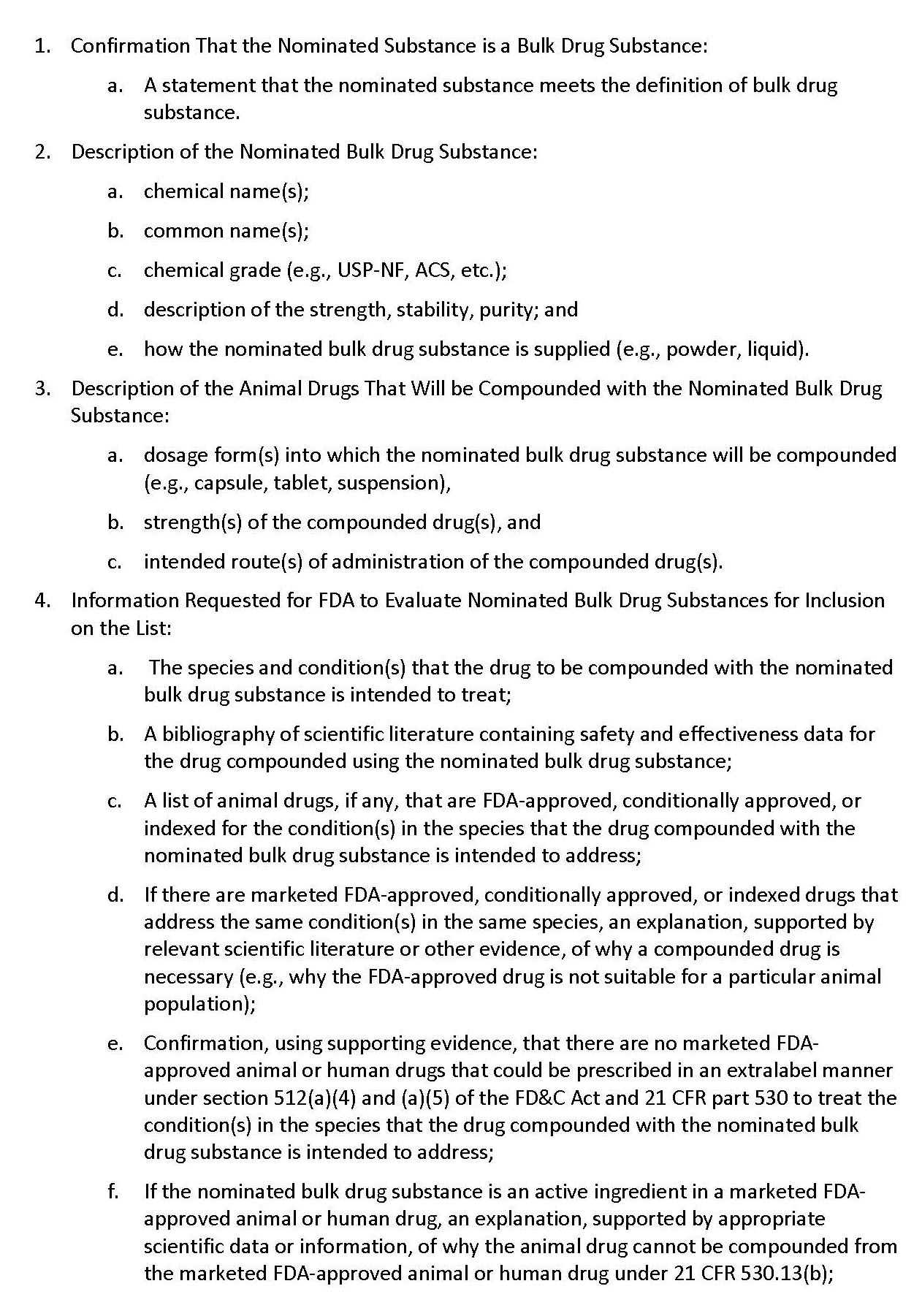